I Remember the Blackshirts

The Battle of Cable Street 1936

“I remember the Blackshirts” it`s funny how the quirkiest of statements can lodge in your long term memory. I recall my Grandad uttering these words, exactly when or why I can`t remember? It must have been some time in the early eighties, in response to something on television at the time.


Thirty plus years and a couple of Italian holidays later, seeing at first hand the tangible remains of Mussolini`s Fascist regime, my Grandad`s words came back to me. Blackshirts? In Derby? What was that all about? A quick internet search provided my connection, a wiki article on Tommy Moran.


Intrigued, I wanted to know more about this Tommy Moran. Most sources churn out the same few lines of Limited information. Ex-Miner, Engineer, Royal Navy boxing champion, folk hero of the British Fascist movement and “Hero” of Cable Street. Tommy can be seen in action in the old newsreel footage above.

Tommy along with a small group of companions was one of the first Blackshirts to reach the vicinity of Cable Street. The small group were on their way to join the B.U.F. column, when they were set upon, outside Mark Lane Station. His companions soon lay sprawled in the street, Tommy with his back to the wall put up a terrific fight against half a dozen or so men who were attacking him simultaneously. One after another he sent them reeling with clean boxing blows, until he himself was felled by a chair leg. The full newsreel, had been shown in cinemas nationwide, but was rapidly withdrawn. Only part of the footage (the above) remains available to the public domain, but it does briefly show Tommy in action and later having his head bandaged.


There is very little information to be found on Tommy, pre July 1933, when he joined Mosley`s British Union of Fascists, and again nothing, post February 1949, with a newspaper article carrying the headline “Fascist Quits Mosley.” Tommy had disappeared. What became of Tommy Moran?


I had no idea what a politically volatile time the 1930`s and 40`s had been, and the more I have read of Tommy, the more intriguing his story has become. Rather than present Tommy`s story as a boring chronology of his life and political actions, I plan to post a series of articles that give an insight into Tommy the man, and his times. 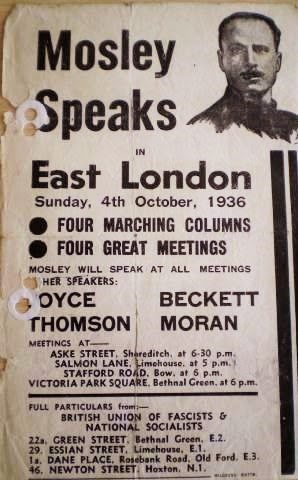 I must emphasise that this is a social history project, with no political views debated nor political ideologies promoted.
This blog is dedicated to the memory of my Grandad, Leonard Calladine, never a Fascist, always a gentleman, and without whom, this project would never have seen the light of day.